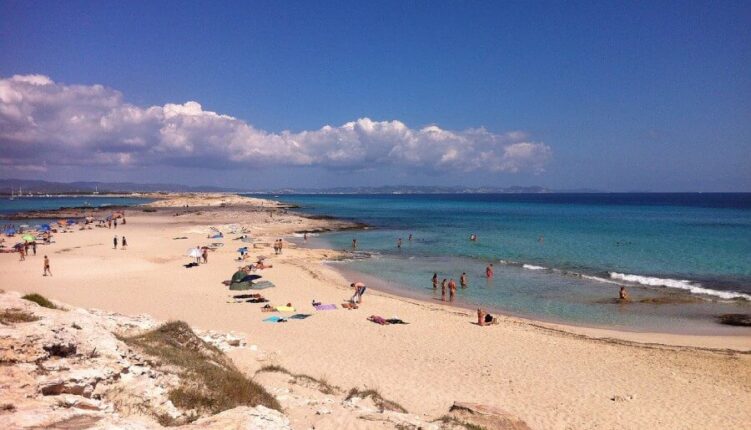 Formentera is a symbol of idyllic relaxation, paradisiacal beaches, and unspoiled corners where you can connect with yourself and with the nature that surrounds you. The island has its rhythm, slow and happily decadent, where you can disconnect from the city’s routine and stress and enjoy some of the best beaches in the Balearic Islands.

Located off the south coast of Ibiza, Formentera has just over 12,100 inhabitants and is about 20 km long. A small paradise in the middle of the Mediterranean where time seems to have stopped to move its visitors to a time where the rush does not exist, and we can still hear our thoughts.

Access to Formentera can only be made by boat, either from Ibiza or from Barcelona, Valencia, or Denia on the mainland. There is a daily ferry service to La Savina’s port, it’s only point of entry and exit, which guarantees the island’s connection with the main European cities.

Formentera is an oasis in the Mediterranean that has managed to preserve its natural essence and is committed to sustainable tourism or the so fashionable “Slow tourism.” From July 1, 2019, a limit was established to circulation cars and motorcycles per day. If you want to move around the island, join the eco-movement, use bicycles or motorcycles or electric cars, and help maintain its primitive natural beauty.

Explore the natural charm of Formentera with a tour of its most iconic landscapes:

Caló des Mort is one of the most idyllic coves of Formentera, located in the south of the island on the coast of Migjorn between the points d’Anguila and sa Fragata. It is a small cove of 70 meters of white sand, and small rock formations surround crystal clear turquoise waters.

Although it is pretty isolated, more and more tourists do not miss the opportunity to visit it to enjoy such a typical picture in which you can see the escars. At these traditional dry docks, fishers leave their boats and are also perfect for diving. It is also the ideal place to enjoy an incredible sunset if you come in the evening.

Located in the south, at the most extreme point of Formentera, facing the African coast, Cap de Barbaria is known because here is located the lighthouse of the same name, one of the island’s symbols.

This arid and rocky cape with hardly any vegetation is 65 meters above sea level. A virgin landscape where the absence of external elements will make us feel that we are between the sky and the sea.  A magical place to connect with our inner selves.

Although it is a spectacular place, at the time you visit, we recommend that you go at sunset if you want to experience the changes of light and colors in contrast to the sea during sunset. If you are not afraid of the dark, stay in the area once the sun has set to admire a starry sky that will be difficult to forget, as it is an area where there is no electricity.

With 2,838 terrestrial hectares and more than 13,000 marine hectares, Ses Salines National Park is located between Ibiza and Formentera and is a clear example of Mediterranean biodiversity in the Balearic Islands. The park is a resting and nesting area for migratory birds, a natural space of the first order.

Within the Ses Salines park, we find the Estany Pudent, a lake of incredible biodiversity, perfect for bird watching typical of the area, such as flamingos, storks, or shelducks.

It is fascinating to tour the park on foot or by bike to enjoy and observe all its natural wealth and reach Ses Salines with its characteristic violet and pink tones. It is a complex system used to extract salt from the seawater through channels and ponds around S’Estany Pudent. Ses Salines was declared an Asset of Cultural Interest in 2004.

Saona cove is another essential visit on the island. This beautiful cove of about 150 meters long, located on the west coast, is the only sandy beach on the west coast of the island flanked by cliffs that protect it from the waves.  The diverse range of blues of its transparent waters will make you fall in love with it.

It has a unique charm due to the fishermen’s huts built among the rocks and sheltering the traditional llauts. It is also perfect for water sports such as snorkeling, paddle surfing, or kayaking. We recommend a paddle excursion from Cala Saona to Punta Rasa’s cliffs and explore its underwater caves if you like an adventure.

Saona cove also offers one of the best sunsets on the island as the sun sets over the horizon, casting a unique hue on the west coast.

Located south of Punta Rasa, the San Guillem Caves are underwater caves of singular beauty and one of the biggest attractions for divers of all levels.

There are two caves only accessible by the sea located at the base of impressive cliffs that run along the coast from Cala Saona to Cabo de Barbaria. They are about 12 meters deep with a white sandy bottom that gives their waters an intense turquoise color.

A rock wall separates the caves, and both have large caverns that allow access to several diverse groups at a time. The wide entrance provides plenty of natural light to the gallery, and in the dark areas, you can find typical species of the island, such as corballos or forkbeards. The air chambers in both caves allow you to emerge to the surface and enjoy a unique landscape of vivid colors and whimsical shapes caused by the sea’s erosion.

La Mola Lighthouse is located on the edge of a cliff 120 meters above sea level situated on La Mola’s plateau at the eastern end of the island, one of the most spectacular and magical points of Formentera. The breathtaking views of the Mediterranean and its natural surroundings have made it a symbol of the island’s skyline.

The lighthouse was built in 1861, during the reign of Isabel II. Since its inauguration, it has been working every night to illuminate the Mediterranea waters to prevent shipwrecks.

It is also known as Jules Verne’s lighthouse since it is mentioned in one of his novels, and since 1978 a commemorative plaque in the vicinity of the lighthouse reminds visitors of this fact.

Ca na Costa is the largest prehistoric monument of Formentera; its discovery proved a prehistoric population inhabited the island.

It is the most significant funerary construction in the Balearic Islands, located between Estany Pudent and Es Pujols. It has a practically circular floor plan in which two main parts are observed: the burial chamber itself, located in the center with the entrance corridor and three rings around it.

Where to stay in Formentera? Accommodations to connect with the island’s natural side

Everything in Formentera comes together to envelop the tourist in the island’s halo of peace and tranquility.  From its small whitewashed villages, its pristine beaches, its wildest natural corners to the accommodations to spend your vacation, places full of charm where tradition and modernity come together to experience that inner connection with the environment.

Our houses to rent in Formentera are located in the best enclaves to enjoy both the beaches and the island’s most rural atmosphere. In all of them, you will find the island’s traditional charm so you can enjoy your vacations without rushing or worries, connect with nature and the energy that emanates from this small paradise.

Whether you are traveling with your family, friends, or partner, our villas and holiday homes in Formentera have all the comforts and equipment inside and offer lovely gardens and terraces adapting to all the needs of capacity and features.

Casa Formentera, wholly integrated into Es Cap de Barbaria’s natural environment, contrasts its modern interior design with the agricultural tradition of this part of the island. The yesteryear paths are still preserved to enjoy bucolic walks through the forest adjoining the house and reach Cala Saona. Its three outdoor porches, chill-out pool area, and garden of aromatic plants will transport you to the purest essence of the island, where time seems to have stopped. It is a statement of intent to enjoy the charm, traditional style, and relaxed lifestyle of the island to the fullest.

Less than 2 hours by plane from the main European cities, Formentera is an idyllic place in the middle of the Mediterranean, where life has another rhythm. The feeling of nature, the inner connection, and disconnection from the worldly noise are still possible. From Eivillas we help you to live an idyllic vacation with our accommodations for holidays in Formentera.

Best areas of Ibiza for your holidays

Ibiza, the Mediterranean Paradise for a Luxury Family Holidays

Would You Like to Pay Your Next Holidays in Ibiza with Bitcoin? Eivillas Makes it Possible

The 7 most iconic places in Formentera