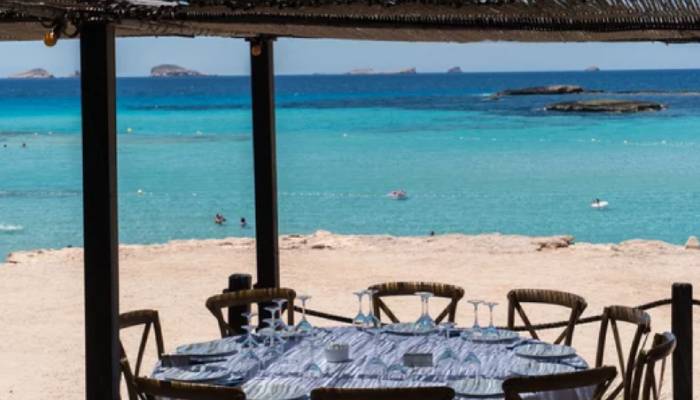 Ibiza’s gastronomy reflects its history, the melting pot of cultures that have inhabited the island over the years, and its location in the Mediterranean. Ibicencan cuisine has a marked seafood flavor with a wide variety of seafood or fish dishes. The land dishes have a strong presence in the gastronomy due to the peasant character of the island’s interior.

Ibicencan cuisine characterizes by using fresh local products that give their broths, rice, or stews intense flavors. The variety of fish in the waters of Ibiza make types such as ray, tuna, “raor,” or “gerret” a fundamental pillar of its gastronomy. Meat dishes, generally pork or lamb, are also typical, without forgetting the rice dishes, vegetables, and fresh seasonal vegetables grown in the island’s fields.

Knowing the island through its gastronomy is another way to discover its culture if you visit Ibiza. A route through the flavors of the land and the sea that will not leave you indifferent, through traditional restaurants where you can taste the typical dishes of Ibizan cuisine like a local.

Are you ready to taste Ibiza traditional cuisine? We leave you our recommendations to explore its gastronomy with a selection of the best dishes that show the tradition, aromas, and the most genuine flavors of Ibizan cuisine and will captivate you from the first bite.

If you are on vacation in Ibiza, you can not miss the opportunity to enjoy one of the most authentic dishes of its gastronomy. The Bullit de peix is one of the best-known dishes of Ibizan cuisine. Original of the traditional cuisine of fishers is a stew of intense flavors made with different fresh rockfish such as grouper, rooster, and scorpionfish accompanied by potatoes and local spices.

To enjoy this traditional recipe, we recommend visiting Port de Balansat restaurant in Puerto de San Miguel in the island’s north. Another great choice is the restaurant S’Espartar in San José. Besides tasting this dish prepared strictly following the traditional recipe, you will enjoy the spectacular views of the mountains of San José and the coast from its terraces.

Borrida de ratjada (stingray fish) is undoubtedly one of the most particular dishes within the typical food of Ibiza due to the cartilaginous texture of the skate and its characteristic flavor.

It is prepared by macerating the chopped fish with salt and lemon before boiling it for a few minutes. Then he makes a stew with garlic, parsley, toasted bread, and paprika, cooked with olive oil from the island and egg.

Due to its particularity, it is not an easy dish to find in the most typical restaurants, so we recommend you to visit Sa Nansa in Ibiza if you do not want to miss this tasty seafood stew.

Arròs de Matanzas is one of the most traditional, tasty, and hearty dishes of Ibicencan gastronomy. Formerly it was prepared on the day of the pig slaughter, hence its name, but nowadays, it is a typical winter dish found in the most traditional restaurants from November to March.

It is a recipe that combines the sea and the mountains. It incorporates fish, cuttlefish or squid, local meat, usually chicken or pork, and other ingredients such as sobrasada, mushrooms, and saffron. If you want to enjoy one of the best Arroz de Matanzas on the island, stop by Cas Pages, a family restaurant in San Carlos.

The calamari a la bruta is another example of a traditional recipe of Ibicencan cuisine where the sea and the countryside come together, as the calamari is cooked with sobrassada.

This tasty and popular dish is worth trying due to its recipe simplicity. It is one of the specialties of the restaurant Ca n’Alfredo in Ibiza, and you can also taste it in Es Rebost de Can Prats in Sant Antoni.

Another typical dish of Ibiza is Sofrit de Pagés, a traditional stew that mixes different types of meat such as chicken, lamb, and, of course, Ibicencan sausages (sobrasada and butifarra). The dish is usually served with seasonal vegetables such as potatoes, peppers, and artichokes.

Originally it was a recipe prepared for the most memorable celebrations, usually in winter after the slaughter, today you can taste this traditional recipe in most restaurants on the island. We recommend you to visit Ca’s Pagès restaurant in Santa Eulària des Riu to try one of the best Sofrit de Pagès on the island.

Something traditional of Balearic cuisine is the sausages with sobrasada and butifarra at the head, although the ingredients vary slightly depending on the island.

In the case of Ibiza, sobrassada is made with lean pork, minced, and mixed with bacon and spices such as paprika, pepper, cloves, and nutmeg. The recipe of the butifarra is an ancient recipe, which would be an Ibicencan version of the black pudding with spices.

Try them on their own or accompanied by a peasant bread with virgin olive oil; they are a delicacy not to be missed.

The cuinat is one of the oldest dishes of Ibicencan gastronomy. It is a traditional stew made with legumes and vegetables, very typical of Good Friday.

The main ingredient is the collejas, a wild vegetable that grows in the countryside of the island. The recipe only uses the leaves, so it must separate them from the stem before starting with the preparation. Usually, this dish is served with virgin olive oil, salt, and lemon juice. At Ca n’Alfredo, you can taste this typical Easter dish

The orelletes are sweet cookie-type cookies that receive their name because of their shape, as they look like little ears. The recipe is made with flour, lemon zest, then fried in oil and coated with plenty of sugar.

We recommend you to visit the Forn des Tabaquet in Ibiza to taste some of the best orelletes of the island along with other typical sweets of its gastronomy.

The greixonera is one of the most representative desserts of the typical cuisine of Ibiza. It is a kind of pudding made with the leftover ensaimada from the previous day, milk, egg, cinnamon, and lemon zest, and then baked in the oven. It is often served with cream and is the best way to end any dinner or meal.

Flaó is a cheesecake traditionally prepared during Easter, and its origin dates back to the 13th century.

Nowadays, it is one of the best-known desserts in Ibicencan cuisine. It is a puff pastry base filled with sheep or goat cheese, eggs, sugar and flavored with mint, aniseed, and Ibicencan herbs that you can try in most bakeries and restaurants on the island.

3 jet ski tours in Ibiza that you should not miss

Start your vacation without shopping

Best areas of Ibiza for your holidays